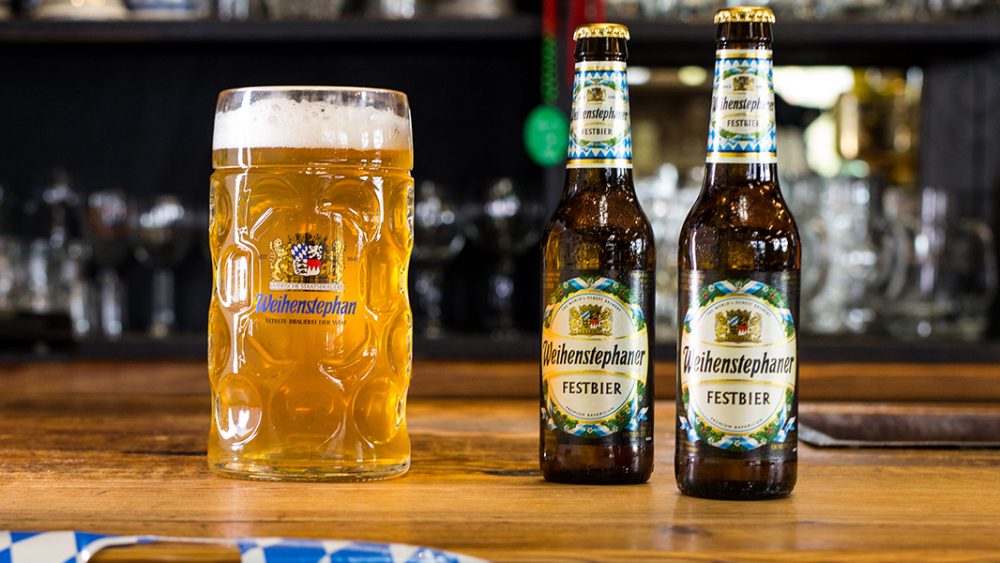 MT. PLEASANT, SC (August 26, 2009) — Weihenstephan, the oldest existing brewery in the world, The Bavarian State Brewery, announces of the release the 2009 Festbier. For Weihenstephan’s master brewers, the worldwide success of their beer is simultaneously both recognition and incentive. A beer is only as good as its ingredients and the brewers who make it. Keeping to their centuries-old tradition, the Festbier is produced using traditional brewing techniques applied with modern science. Developed with Bavarian light barley malt, Hallertauer Taurus and Hallertauer Traditional hops, Weihenstephan’s Festbier represents a flavorful, full-bodied beer with a deep golden appearance and a rich, hoppy flavor that will make you feel like you are sipping this delightful brew in the heart of Germany. Pairing wonderfully with roasted meats, poultry and game, the Festbier is available in a 12-ounce bottle, a 16.9-ounce bottle, and a 50-liter keg.

Mike Battaglia, New York Market Manager of Total Beverage Solution, comments on the release stating “Weihenstephan is a truly unique brand and we are proud to import and represent such an authentic German beer. The 2009 Festbier is a rich Oktoberfest seasonal and is a perfect complement for fall harvest cuisine.”

ABOUT WEIHENSTEPHAN
Nearly one thousand years ago it was the monastery brewery of the Benedictine monks, then the Royal Bavarian State Brewery. Today, as a regulated enterprise of the free state of Bavaria, it is a company run according to the precepts of private business. Thus the Weihenstephan Monastery Brewery — after nearly a thousand years — still stands atop Nährberg Hill, proud of its quality and its tradition and conscious of its position as the oldest existing brewery in the world. The Weihenstephan Brewery in Freising, Germany is a unique combination of tradition and custom, proven knowledge and modern science which gives the brewery its own identity. Beer brewing, if done properly, is a special philosophy and even as times change with new developments and achievements the Weihenstephan beer has always remained the same.

As the oldest still-functioning brewery in the world, embedded in the relatively new Weihenstephan Science Center of Munich’s University of Applied Sciences, it is the unique conjunction of the traditions of the erstwhile monastery brewery with cutting-edge science that gives Weihenstephan beer its very special identity and quality. Weihenstephan Brands include: Vitus, Hefe-Weissbier, Hefe-Weissbier Dunkel, Korbinian, Kristall Weissbier, Original Lager, and Festbier.

ABOUT TOTAL BEVERAGE SOLUTION (TBS)
With an impressive portfolio of wine, beer, and premium spirits, Total Beverage Solution (TBS) supplies the U.S. market with some of the world’s top brands. Founded in 2002, the company seeks to represent and own brands that have market presence but still have potential for growth. Passionate about quality and craftsmanship, the company strives to work with producers who make the finest products and to create value and demand for each brand based on its unique qualities. With this philosophy, Total Beverage Solution has quickly earned a reputation for its market expertise and proven sales results. For more information, visit www.totalbeveragesolution.com or log onto www.totalbeveragesolution.com/media/ to download a media kit. Total Beverage Solution is headquartered at 1671 Belle Isle Ave. Suite 125, Mt. Pleasant, SC 29464 Phone: (843) 881-0761.

For more information on Weihenstephan and other TBS brands log onto www.totalbeveragesolution.com/media to download a media kit.