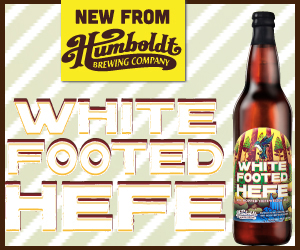 Paso Robles, CA – July 14, 2015 – Drink in the sunshine with Humboldt Brewing Company’s latest limited edition brew, White Footed Hefe, a dry-hopped Hefeweizen. The beer gets its name from one of the redwood’s most elusive creatures, the White Footed Vole. Clocking in at an even 7% this bright, sunshiny beer goes down easy in the summer heat.

The latest entry from Humboldt Brewing Company is a cloudy, golden brew that has the classic Humboldt malt profile with a big, wheaty body, dry-hopped to finish. Shining through the hazy ale you’ll find classic notes of citrus, yeast and wheat, rounded out with just enough hops to make things interesting.

As for the inspiration for the name of the brew, little is known about the White Footed Vole. Only a handful of the creatures have ever been captured or studied in the wild. Tom Rose, VP of Marketing and Sales, says they chose this name in order to continue to honor the great redwoods and the brewery’s commitment to nature.

“Protecting the redwoods is a lot more than just saving trees,” said Rose, “it’s about caring for the whole ecosystem – from the large trees to the tiny inhabitants who call the redwoods their home. We hope people enjoy this brew and think a little about the world around them.” Humboldt Brewing Company’s other 22-ounce bottles are also named after inhabitants of the lost coast. 500 B.C., their Double IPA, is named in honor of the redwoods, as some of the trees can live for over 2,500 years. Black Xantus, an imperial stout, is named after an endemic hummingbird in the area.

White Footed Hefe, along with the rest of the line up will be widely available throughout Humboldt Brewing Company’s distribution footprint and can be found using the brewery’s Brew Finder.